South Africa joining India in the BRIC S club of developing economies gives weight to this inspired move by Jindal Africa. Since its inception in November 2008, Jindal Africa has remained committed to the prospect of continuous growth on the continent, setting their foothold solidly at the centre of South Africa’s vibrant economic landscape through the construction of their new corporate head office in Bryanston, Johannesburg.

Jindal Africa’s management is eager to infuse the country with the company’s innovative, pioneering spirit while strengthening bilateral relations between India and South Africa through skills transfer and inclusive development.

Jindal Africa’s operational activities in the country include the Kiepersol Colliery, which is an underground operation located within the boundaries of the Mkhondo Local Municipality, adjacent to the R543 route between Piet Retief and Wakkerstroom, within the jurisdiction of the Gert Sibande district in Mpumalanga, South Africa.

Kiepersol Colliery, like many coal producers, has held its stand amidst the challenges faced during the last annual period. Jindal Africa remains committed to the important role that coal plays in the South African economy, its role as a primary energy source for electricity generation, as well as direct and indirect job creation.

Our Kiepersol Colliery remains a prominent producer of high quality anthracite and lean bituminous coal, which is sold on both the domestic and international metallurgical coal markets, and is all made possible with a dedicated private railway siding which forms the bulk of our infrastructure, which in turn enables the mine to dispatch orders directly to clients and to the ports for exports, enabling us to maintain the high quality service and delivery standards our clients have become accustomed to.

The Richards Bay dry bulk terminal has facilities for the company to load carriers as large as Panamax sized vessels. The Colliery holds a dedicated workforce of over 800 employees, including contractors. 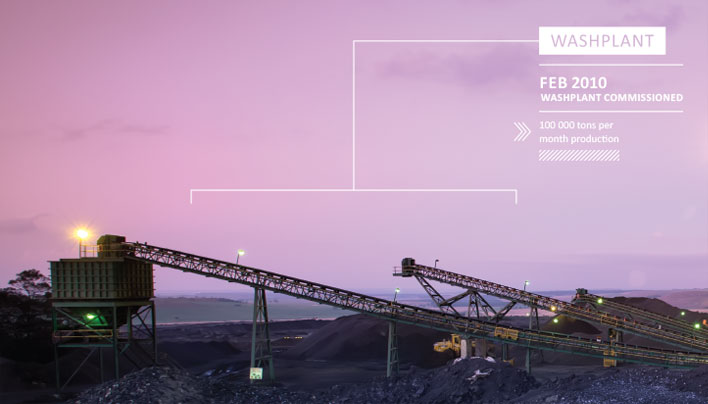 Jindal Africa feels that the biggest South African investment is on the horizon, with the current vision to substantially invest in the newest pipeline project, an iron ore development with an 20 MT PA operation at steady state. This magnetite resource with potential reserves of several billion tonnes is located 25 kilometres South East of the Melmoth, a small town in KwaZulu-Natal. This abundant open cast resource has a favourable strip ratio, with significant ramp up production anticipated on this unexplored prospecting area. Since acquiring these two respective areas, comprising of 21 000 hectares, the company has aggressively commenced with exploration activities to prove their resource potential, approached the market to establish a pellet plant as well as appointed environmental consultants to commence with the Environmental Impact Assessment and Social studies. Thus, providing the necessary baseline survey to expedite the Pre-Feasibility Study.

This iron ore project is ideally situated in close proximity to a dedicated railway siding (“Nkwaleni Siding”), which will assist with the movement of product to the market, alongside the potential of road hauling to the port of Richards Bay, some 70 kilometres from project location and a rail distance of 80 kilometres.

Furthermore, since June 2013 the company has embarked on investing towards establishing its own state of the art iron ore laboratory in the area, with capacity of processing 50 samples per day and providing 30 jobs on a three shifts around the clock basis.

The laboratory, which is soon to be ISO accredited, has significantly enhanced the turn-around time of sample results as well as significantly reduced expenditure on external laboratories to analyze our samples.

The economic benefit of implementing this project will see the local communities benefit through direct and indirect job creation. Further infrastructure development pertaining to water, electricity, roads and schools.

Jindal Africa’s aim in supporting the local communities healthcare with the implementation of the project clinic and health services within areas surrounding the project. Jindal Africa has considered the high unemployment rate in this project area as one of its primary focus areas as we recognise education as one of the building blocks of any nation and considers it a major priority in the eradication of poverty through suitable measures aimed at benefiting the youth.

Such measures are strongly supported through the company’s long standing educational schemes namely bursary allocations, mentorship programs and career guidance for the youth through learnership programs. We recognise that reinvesting our resources in the development of young and promising minds helps create a source of well-trained workers and professionals who have a positive impact on our vision for the future.