During August 2013, the Chirodzi mine was inaugurated by Honourable President Arnando Emílio Guebuza and JSPL Chairman Naveen Jindal.

This opencast coal mine, with a proven reserve of 700 million tonnes (MT) and an expected life-of-mine of 25 years, commenced operations on its 10 million tonnes per annum (MT PA) coal mine, with the production of 3 MT in the first phase, during 2012. The last annual period has seen significant strides achieved towards the evacuation of the coking coal and high grade thermal coal, with the first shipment of 36 000 metric tonnes of coal exported during the 1st quarter of 2013.

With Phase One complete and aiming for 3 MT by the end of this year, we are immediately moving into the second phase, and the substantial reserves we have unearthed will help produce in excess of 10 MT PA of high grade coal from 2015 onwards.

The first step will be the initiation of the second phase at Chirodzi mine, which will see production more than tripling to 10 MT PA within three years.

Second, a subsequent doubling of output to 20 MT PA.

And third, the possible construction and operation of Africa’s first coal slurry pipeline to transport the product from the mine to the port of Beira, a distance of several hundred kilometres, with a conceptual study for the development of the coal slurry pipeline from our mine to the Beira port having been submitted to the Mozambican government for review. The current Beira port capacity is being upgraded to an estimated 20 MT , Nacala too will have a capacity of 40 MT by 2016, with a new port called Macuzi projected to handle approximately 30 MT PA plus by 2025. Currently there are 1,200 personnel working at this operation, mainly comprising of the local population from the area.

The off-taker of this power is intended to be used by the Mozambican Government. Jindal Africa’s primary intention of establishing operations in Mozambique is to fulfill the vision of erecting a power plant within the country as well as establishing a cost-effective export operation.

Jindal realise that with the support of the Government and commitment of the locals this project has fast become a success of which all can be proud. 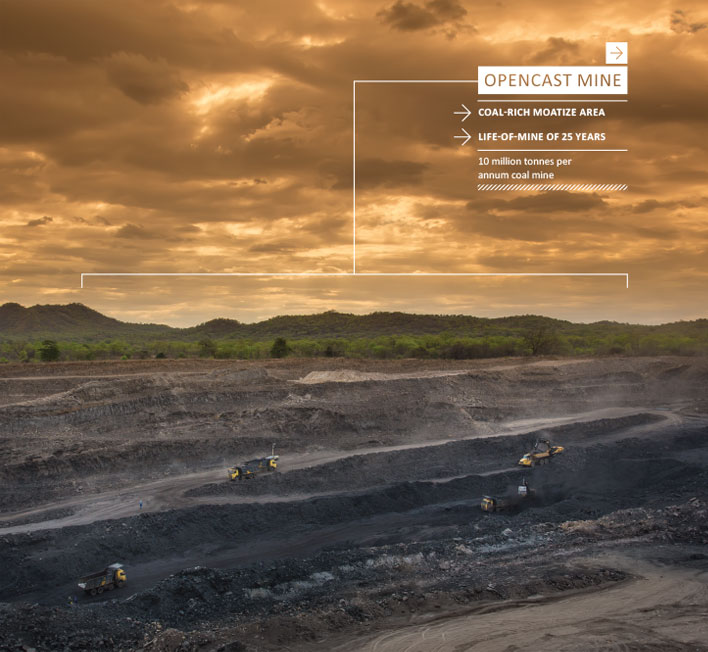